End of the Innocence (Black Earth #1)

On the evening of his high school graduation, Nathan Pierce collapses on stage. Plagued with visions of a strange girl intent on killing herself, he wonders if his mental instability is a consequence of the deadly car accident he was in days earlier.

Heather Rhodes, wracked with guilt because of the fatal wreck, finds she is unable to forgive herself and begins to question her own beliefs. While the death of a newborn weighs on her heart, on her mind is the strange gift she was able to use to protect her and Nathan in the accident…a gift that Heather wonders may have just been a figment of her imagination.

Cynthia Ruin, aka The Pink Rabbit, decides that her high school graduation night should be used for partying, not walking down the football field. At a nightclub in Scottsdale, Cynthia finds more than she bargained for when a stranger from her past decides to exact his revenge on her for a prior rejection.

All three come to realize that their current problems are nothing compared to the stars that are falling from the sky. During the global crisis, the President of the United States makes it her personal mission to keep the country on the right track to becoming a world superpower, while a hostile entity known only as Absolute threatens her administration.

Meanwhile, word starts to spread that the falling stars may not be stars at all… 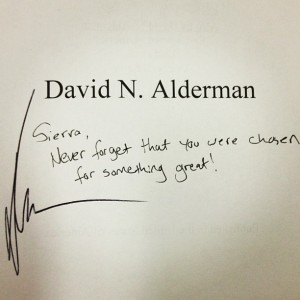 One of the first signed books I’ve ever owned. Of course I instagrammed it.

I love to write.

2 comments on “Review: End of the Innocence by David N. Alderman”